COLLECTORS’ NEWS (12/28/13)
Here’s a glimpse at the Japanese artwork for the "High Hopes" CD album, via Sony Music Japan (with thanks to Yokoyama Nobuyoshi on Facebook): 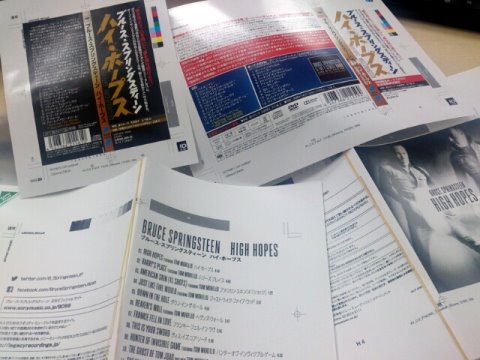 WEBMASTERS' NOTE (12/20/13)
We would like to wish all our visitors, friends and contributors a Merry Christmas and a Happy New Year. Oh, and make sure to check out this online article recently published on Lawrence Kirsch's "The Light In Darkness" website.

COLLECTORS’ NEWS (11/25/13)
Although we were reluctant to believe the rumours at first as they sounded way too outlandish to be possibly true, it turns out that Bruce Springsteen’s upcoming “new album” indeed will be nothing more than a random compilation of cover versions, some hitherto unknown older songs, and new studio re-recordings of previously released material; all collected on a 12-track CD/2-LP vinyl set entitled “High Hopes” due on 01/14/04. Diving further into the past, a special “Amazon Limited Edition” is going to feature an exclusive bonus DVD of Bruce and the E Street Band performing the entire “Born In The U.S.A.” album, recorded at this year’s “Hard Rock Calling” show in London. Click here for the full “High Hopes” tracklist and other details. 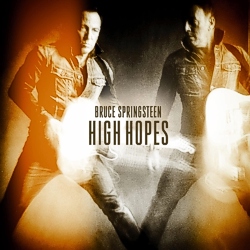 (Special thanks to Domingo Bauza, Lars Becker and Massimo Truchet for their help with most of these updates)

COLLECTORS’ NEWS (09/22/13)
Following up on our 07/25 News entry, Amnesty International's "The Human Rights Concerts" website has recently announced more material from the October 15, 1988 "Human Rights Now!" show in Buenos Aires, Argentina to be issued as part of a 6-DVD box (worldwide) and separate 2-CD set (Europe only) on 10/28, under the collective title of "ˇReleased!". It appears that neither format will actually contain the full concert (as originally expected), but according to the CD tracklist posted on this Genesis fan site, Bruce and the E Street Band are still going to be featured quite prominently over the second disc, which also includes both duets performed with Sting that night. In addition, the December 10, 1998 "The Struggle Continues..." show in Paris, France that had Springsteen playing a five-song solo acoustic set is also scheduled for a simultaneous 2-CD release, although no details are known on this one yet. 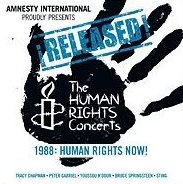 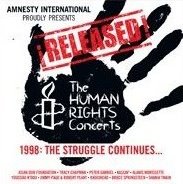 SPECIAL WEBMASTERS’ NOTE (09/15/13)
We are sad to report that Steven Jump, co-founder of Cheltenham's independent Springsteen specialist store "Badlands", has suddenly and unexpectedly passed away this past Saturday. Steven had established the shop/mail order business along with his brother Philip in 1986, and - in addition to offering a broad selection of Bruce records and memorabilia - the two also published a fanzine called "For True Rockers Only" (later "The Ties That Bind") as well as organizing trips to Springsteen concerts all over Europe and in the US. Our condolences go out to Phil, the entire Jump family, and the staff at “Badlands”. Rest easy, Steve.

COLLECTORS’ NEWS (08/30/13)
For the first time in almost 15 years, Sony Music are to release a mid-price reissue of the full 4-disc “Tracks” box set as a DVD-sized package on 09/30. Note that, contrary to some reports stating otherwise, there apparently hasn’t been any additional remixing/remastering done to the material (and it shouldn’t be expected that the various errors found in the original booklet’s liner notes and lyrics were corrected either). 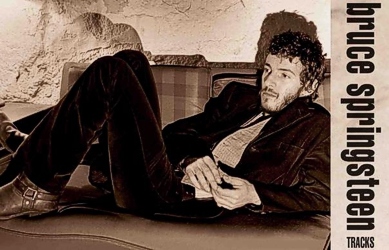 (Special thanks to Roberto Reverberi, Josef Schrefel and Mike Simpson for their help with some of these updates)

COLLECTORS’ NEWS (07/25/13)
Eagle Rock Entertainment have recently issued a Various Artists 2-CD set entitled "Get Up! Stand Up! Highlights From The Human Rights Concerts 1986-1998", which includes four previously unreleased Springsteen live audio tracks; namely "Born In The U.S.A." and "I'm On Fire" (from the final show of Amnesty International's "Human Rights Now!" tour in Buenos Aires, Argentina on October 15, 1988), plus his solo acoustic rendition of "No Surrender" and a joint performance of Bob Marley’s "Get Up, Stand Up" (sharing vocals with Tracy Chapman, Peter Gabriel and Youssou N'Dour; both recorded in Paris, France on December 10, 1998). The compilation is also available as a separate DVD with identical tracklisting, marking the first-ever official release of the Buenos Aires footage. It is of note that Amnesty's "The Human Rights Concerts" website proposes the full concert to appear in another DVD box set due this October. 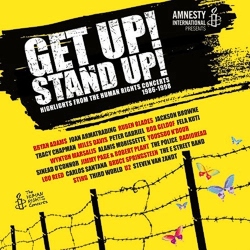 COLLECTORS’ NEWS (03/16/13)
A commercial version of the “Collection: 1973-2012” CD sampler mentioned in our last News entry was just released in Australia as an “Australian Tour Edition”, tying in with Springsteen’s 10-date trek of the continent that has kicked off in Brisbane last Thursday. Apparently, the only real difference in packaging compared to the US promo issue given out at the “MusiCares” event is a transparent sticker added to the front cover (see below). It remains unclear at this point whether the CD is also going to be available in other countries, as there has been virtually no promotion for it at all. Thanks to Mark Bahlen for the info and scan. 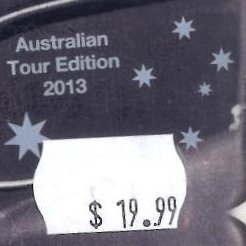 In other news, the folks at Backstreets.com have recently posted a picture of the exclusive Springsteen/Paul Nelson interview CD included with their “E Street Shuffle” book pre-order offer (see our 01/01 News entry): 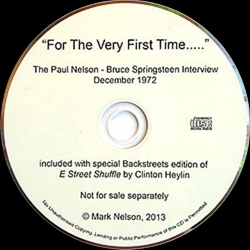 COLLECTORS’ NEWS (02/12/13)
Guests of the recent "MusiCares Person Of The Year" tribute event that was held in Los Angeles on February 8 to honour Bruce Springsteen for both his artistic achievements and philanthropic efforts were presented with a special 18-track, promo-only CD sampler entitled "Collection: 1973-2012", which contains selections off most of Bruce's studio albums from "The Wild, The Innocent & The E Street Shuffle" through to "Wrecking Ball". While initially believed to have been produced exclusively for the MusiCares bash, it turns out that - according to several international online music stores like Amazon in Germany, imusic in Denmark and HMV in Japan - this compilation is apparently scheduled to see a widespread commercial release by mid-April, presumably to coincide with the 2013 tour. For the time being, however, scans of the promotional version's cardboard picture sleeve are shown below. 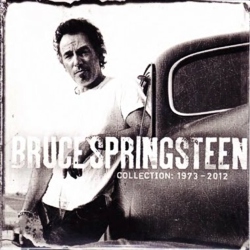 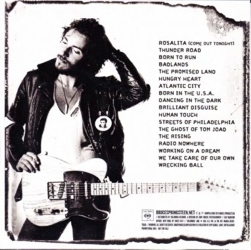 (Special thanks to Kevin Harrison and Bill & Mary Ellen Jelen) 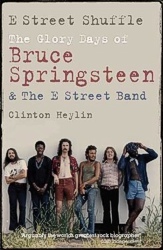